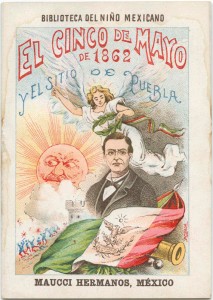 May 5th is coming up, and while we're all excited for the return of summer (and the end of school!), here's a quick history lesson with a few reasons why you should celebrate this significant Mexican and American holiday.

Cinco de Mayo celebrations commemorate the victory by Mexican forces over the (much larger) invading French army on May 5, 1862 near the city of Puebla. In the 151 years since the battle, no European military force has invaded a country in the Americas. But here's where it gets interesting: this victory was important, symbolically and practically, to the United States, which was in the early years of the Civil War. Celebrations north of the border began as a way to muster enthusiasm for the causes of freedom and democracy--and to commemorate the friendship between the two countries. Practically, this victory meant that Napoleon III could no longer resupply the Confederate troops, allowing the Union to build the army that eventually won the Civil War.

History aside, we can celebrate this binational holiday with nachos, tacos, quesadillas--and of course, Lt. Blender's Margarita in a Bag. If you're looking for something new this spring, doctor up your margarita with a splash of grapefruit soda, for a riff on the classic Paloma cocktail. Or add a bit of olive juice and garnish with a skewer of green olives for the Mexican Martini.

In any case, enjoy the holiday, and celebrate freedom, our long friendship with Mexico, and the return of summer this May 5!